The increase of life expectancy and the consequent ageing of population, constitute a prominent social emergency, which brings all the problems related to accepting a not particularly attractive stage of life which has, by no means, less dignity than others. This is why geriatric medicine, with its peculiarities linked to physical ageing, the decline of the muscular and skeletal system, and the prevention of related disabilities, normal and pathological ageing of the brain, polipathology and the perception of pain itself, have led to a specialised branch of medicine with an autonomous role, comparable in all aspects to disciplines which have been codified for decades, such as paediatrics. 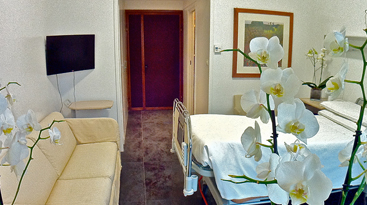 Attention for elderly people, both from a physical and psychological perspective (an aspect we are particularly trained to deal with at Le Betulle), allows a holistic approach to the problem.