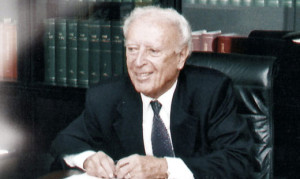 Prof. Augusto Guida in his study

Over the past 50 years, scientific progress in the field of medicine has resulted in increasingly rapid changes in the way we think about, understand and cure diseases.
This is even truer in the case of psychiatry, which was revolutionised in 1952 by the synthesis of pharmaceutical products and chlorpromazine (Thorazine), which resulted in the creation of medications that impact positively on psychiatric disorders.

The ability to change and normalise abnormal moods, eliminate psychological pain and despair, restore serenity and dignity, and give patients the pleasure of living thanks to chemicals synthesised in a laboratory makes the discovery of psychoactive medicines just as important as that of antibiotics.

Psychiatric illness, which in some cases can feel like a hangover that is not induced by alcohol and can last a lifetime, interests, involves and changes the affected individual’s personality in its entirely and is not limited, as in other diseases, to an organ or single part of the body unrelated to the ego.

For this reason, the resulting damage is all encompassing and far more complex to treat. Psychiatric illnesses alter the patient’s critical skills and self-awareness of their disease, making them sick, and in severe cases, even dangerous to themselves and others, which results in the need for constant care.

The treatment of these illnesses is particularly complex and requires a highly specialised approach. Treatment does not involve only pharmacological or surgical interventions used to treat other diseases, but also psychological and socio-therapeutic treatment. In fact, these treatments should be considered as exclusive, rather, they should be integrated in different combinations and maybe even at different times according to the characteristics of the psychiatric illness and the patient affected.

In relation to psychopharmacology, it is still not possible to objectively define the biochemical and structural alterations that underpin different psychiatric illnesses in terms of numerical and morphological data, which makes it impossible to impose scientifically rationalised treatments that can be considered “laboratory proven” as this concept is still very much work-in-progress in the field of psychiatry.
It should be added that, unlike other pharmaceutical products, psychoactive medications share a unique characteristic – that of inducing responses that can often be too personalised (and frequently differ in relation to the specific dosage), and can sometimes even be unpredictable or paradoxical.

Competing elements in the origins of various psychiatric disorders, including conflicting psychological and environmental factors – to a differing or unknown extent – in other diseases, further complicate the treatment and management of these illnesses.

Therefore, in an apparently legitimate and consequential manner, psychological illness is related to abnormally emphasised existential problems, or at least are motivated by this cause. As a result, the successful treatment of a psychiatric disease is seen, if simplistically, to depend on the resolution of these issues. The “Le Betulle” Clinic has been treating illnesses of this kind for over 40 years.

All medical staff and heath care assistants working at “Le Betulle” are specialised in psychiatry, with in-depth knowledge of psychopharmacology and biological therapy, as well as proven experience in the field of psychotherapy and its various declinations (psychoanalysis, cognitive-behavioural therapy, group therapy, etc.).

Like all patients admitted to the clinic, psychiatric patients are housed in comfortable single rooms, each of which is equipped with a telephone, a private bathroom, closet, TV and terrace.
On admission to the clinic, the patient’s full medical history is documented and they undergo rigorous medical examination, which can range from a general health assessment to specialised examinations when required (clinical specialist, radiology, ultrasound, etc.). Patients are monitored at least twice a day to assess the effects of specific therapies and immediately start psychotherapy sessions.
When required, around the clock personal assistance can also be provided by specialised staff. However, this type of care is obviously only required for patients who depend on full-time assistance, are psychotic or severely depressed.

Depression: a disease that affects a constantly growing number of people and is becoming increasingly socially relevant

Undoubtedly one of the main psychiatric disorders, Depression has recently been defined a disease of social interest due the dramatic increase in the number of people it affects.
Today many people talk and write about Depression, and particularly about its treatment, but often do so without the necessary competence, which creates considerable confusion.
Depression is a disease that coexists with altered biochemistry in the brain (not unlike diabetes for example, but far more complex) and can be understood as an abnormal heightening of normal mood swings that all individuals experience, or as a pathological alteration of mood that differs from normal sadness.Obviously this does not mean that a psychological trauma or the effects of stress over extended periods, specific psycho-social events (bereavement, retirement, previous experiences of separation in childhood), certain diseases or specific pharmaceutical treatments cannot trigger the disease (in the forms of physco-reactive or iatrogenic depression).Nevertheless, given that grief, frustration and the experience of failure can lead to depression, it is necessary to admit the existence of a particular lability in thymic homeostasis, which differs from case to case.
In fact, in a normal person who does not have a genetic predisposition to diabetes, excess food causes obesity not diabetes. Likewise, people who are not predisposed to depression do not develop the disease as a result of existential stresses as these elements are experienced and managed within the boundaries of normal sadness.

There are different forms of depression: this polysymptomatic disease can manifest either as distinct psychological difficulties (e.g. dominant suicidal tendencies) or in somatic forms (e.g. as osteo-articular, cardiovascular or gastrointestinal somatisation), which can also alternate with exaggerated mood swings of a euphoric-maniacal nature, giving rise to exceptionally varied and complex clinical cases that can be very difficult to diagnose.

“Le Betulle” Clinic is particularly well equipped and highly specialised in dealing with depression quickly and effectively: in fact, for this type of pathology the duration of hospitalisation is often less than 10-15 days and rarely lasts longer than a month.

In order to ensure optimal treatment management, some basic principles should be kept in mind:

Antidepressants can also be combined with lithium salts, thyroid hormones and other psychoactive drugs.

Written by Prof. Augusto Guida for the first version of “Le Betulle” website, 2004